He says Britain is “foul with patriotism” and the royals have “hijacked the Olympics”. Just another day for Morrissey’s big mouth then… or does he have a point?

Morrissey, he’s the national treasure most likely to tip over the nation’s treasure chest and flick V-signs at the Queen. Let’s be honest, the former Smiths frontman has made a career of saying something provocative just at the wrong/right moment.

For the Diamond Jubilee he called the royal family “benefit scroungers”. Now he’s labelled Britain’s Olympic celebrations “lethal”, “foul” and “jingoistic”, comparing the national mood to that of 1939 Germany.

In his fan blog True To You he wrote: “I am unable to watch the Olympics due to the blustering jingoism that drenches the event. Has England ever been quite so foul with patriotism?” 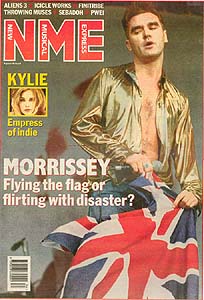 He went on: “The ‘dazzling royals’ have, quite naturally, hijacked the Olympics for their own empirical needs, and no oppositional voice is allowed in the free press. It is lethal to witness.”

And he ended with a warning of the “grotesque inevitability of Lord and Lady Beckham”.

This from the man who, in 1992, was accused of “flirting with disaster” when he danced entangled with the union flag during a gig in London’s Finsbury Park.

‘He seeks to shock’

“Because he seeks to shock, it’s natural to want not to be shocked by him,” music writer and radio presenter Andrew Collins said.

“Some of the points he makes are valid ones – the unification of a divided nation by way of brands and corporatised flag-waving; the commodification of the young royals – but he wilfully undermines these by resorting to shock-horror button pushing, throwing in the Nazi Germany allusion, and rewiring ‘patriotism’ as ‘jingoism’, which is quite different, but has more impact.”

Mark Simpson, author of the biography Saint Morrissey, said the singer was “always a bit like the mad old uncle at Christmas, even when he was a teenager.”

He said: “Vegetarian or not, he’s also always enjoyed taking aim at sacred cows – and as the response to his admittedly somewhat hyperbolic remarks has shown, he’s scored a direct hit with the London Olympics, which has been elevated by the London media lately to something sacred and beyond criticism.”

Is it really so strange?

“His quest to be controversial sometimes leads him to spout the idiotic.

“To be fair before the Games started it did seem that there were very few actual people who were not sceptical of the benefits that this £9bn taxpayer-funded event would have for the ordinary Joe and Josephine. However, attitudes have transformed.

“Starting with the enormous goodwill generated by the torch ceremonies then the warm-the-cockles-of-your-heart opening ceremony, then topped by the amazing run of medal success there is an inescapable feel-good factor.

“Even the hardest of hearts seems to have melted. As an expat Morrissey is unaware of this and I feel he has misjudged the public on this one.”

Saint or sinner, Morrissey’s attempt at puncturing the patriotic mood has successfully propelled him back into the headlines. A search on Google News returns 115 reports of his latest outburst.

Lord Beckham and dazzling Kate aside, perhaps there is a simple excuse for Morrissey’s bad mood: he is sore at Danny Boyle for choosing New Order, Bowie, the Sex Pistols and many more to soundtrack the Olympic opening ceremony… but no Smiths and certainly no Moz.

A version of this article was first published at channel4.com/news

Give me my mirror, love

And oh, oh, how many years

Climbing out your window