After completing Lockdown LPs, which took me a year, I’ve decided it’s only right to roll out my 12-inch singles. This time, reader, I’m using the alphabet.

Found on Knaresborough market, screaming out to be busted free from a world of Celine Dion and Luther Vandross. Come on then, hop in. Obviously a gleaming Europop classic and made better by the Playskool cover and price sticker eye patch on Benny.

A six-track EP bought on the recommendation of my friend, Steve. It burbles along trippily, as the name suggests, and all six versions weave a blanket of fuzzy electro across an early Friday evening. It reminds me of playing computer games with my little sister Kerstin, aged nine and 13. We spent hours hooked on the driving game Out Run and Kerstin invented an imaginary location for our travails: Pentonville Casino.

A record bought purely for the artwork in the days when I didn’t own anything to play it on. Sexy Boy was the breakthrough hit for “Air French Band” and they made a huge impression on me. They glue together school and university but there’s glitter in the glue and Francoise Hardy magically turns up on the B-side, Jeanne.

I love Air for the feeling they give me: it is at times mournful space disco but the music reminds me so crisply of an optimistic, exciting time. Nothing much was happening; it was my gap year and I was working in an Off Licence selling gin to old ladies, but I was finally free of essays and looming Septembers and I was looking across a blank landscape that was beginning to glow on the horizon.

I discovered Dot Allison as a solo artist and back-tracked through her career to find the mesmerising One Dove, her former band and a lesser known Andrew Weatherall project. I fell in love and to this day I dream of finding Morning Dove White on LP. Maybe one day I will; I just need to stay on my toes and visit more charity shops in Glasgow. A folded piece of paper tumbles out of the sleeve and it’s a “set list” typed up by my friend Steve for our Leeds Student Radio music show in 1999-ish. He wants to play Curtis Mayfield and Ganga Kru. I want to play Gabrielle.

I have no idea whether this is some rare promo copy or just the standard release. I know I picked it up for £3 from Rat Records, the vinyl treasure trove in Camberwell, south London. Neighbourhood #2 (Laika) is on side A, with Neighbourhood #3 (Power Out) on the B-side. It’s messy, raw and gloriously reminds me of my first few months in London. 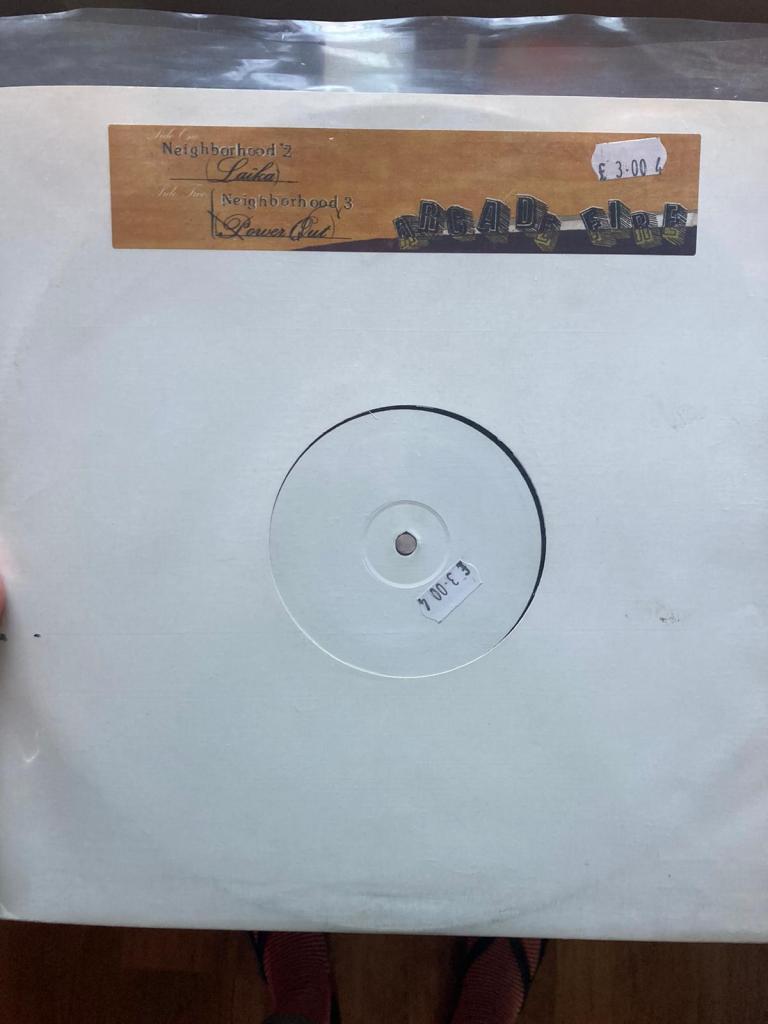 The one with rave pan pipes and their best song of the last few years. It brings back my last few months at Radio 1 where it, amazingly, got regular air play. Every desk had its own speaker and I used to sneakily crank up the volume when this swept through the office, a brief spark in a sea of autotuned voices feat. other autotuned voices.

8) Beats International – Dub Be Good To Me (Go Beat)

A physically dirty record, somehow the song’s fizzing poptimism fights its way through the grime. I never get bored of Dub Be Good To Me. It always makes people grin on the dancefloor. The image of Lindy Layton trying to act cool in Norman Cook’s oversized baseball jacket on Top of the Pops sums up the feeling of everyone winging it from that time. Also, the B-side is called Invasion of the Estate Agents. Because: 1990s.

I’d forgotten how fun it is hearing B-sides and it’s through them that I access my 16-year-old self; lying on my bed, loft window wide open, listening to these tunes when I should have been doing my homework. She’s So High is, of course, a Blur classic – and the artwork feels iconic now too – but the groovy, extended version of I Know is where the magic lies. It’s Damon Albarn with a bowl cut, swaying about, head upside down, about to put his burgundy Dock Marten through the speaker with a gentle snarl. 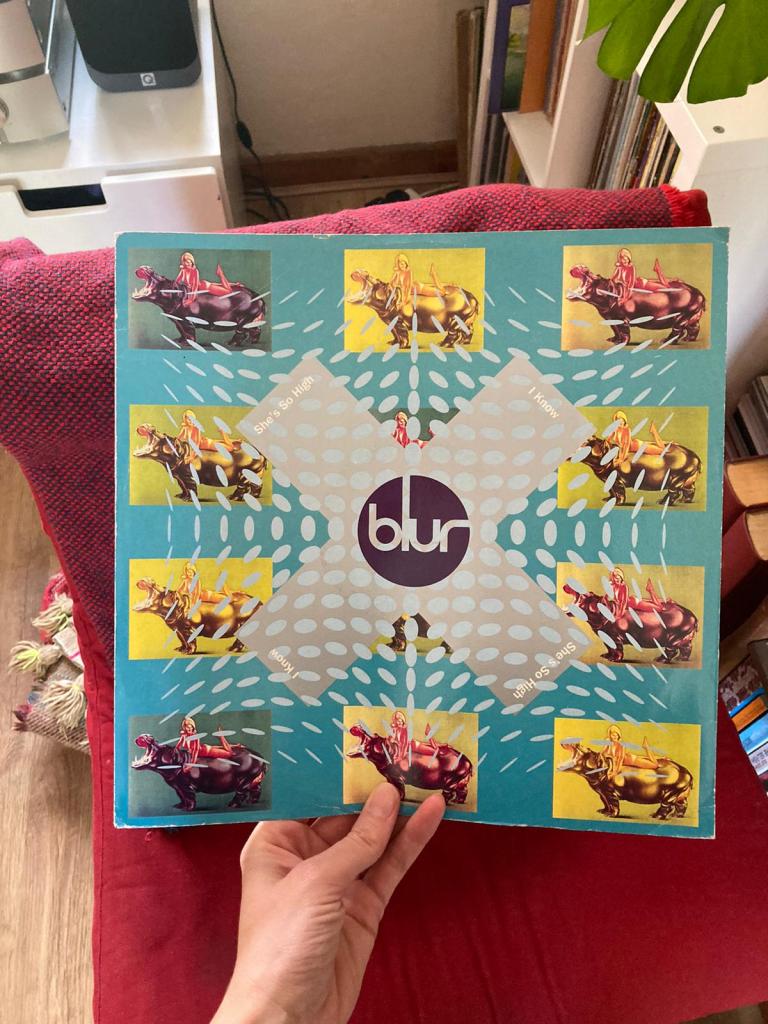 A fervoured image of another world
Is nothing in particular now
This single is made far more enjoyable by the fact it never appeared on an album. It should, of course, have been on Modern Life is Rubbish next to the better known hits For Tomorrow and Chemical World. But Blur took offence at its modest chart position of 32 and decided to deny fans a second chance. So it’s a cult classic instead. And it always causes a slightly unhinged mosh pit surge.

What a mad cover. A glorious, ugly, yuppies-on-pills two fingers to the pop industry of the early 1990s. Most pop bands opted for themselves on the cover (Gary Barlow in a tank top etc) around this time so it was brave. Chemical World is a fantastic tune but, as ever, it’s one of the B-sides that gets my heart all a-quiver. I remember listening to Young and Lovely, aged 16, and realising it was, kind of, about me. Even then I knew this state of loveliness was a flickering light that would dance away from me.

One of Blur’s best songs but somehow it gets forgotten. Featuring the heavenly nineties bonus of Laetitia from Stereolab’s elegant French vowels, it was always one of the tunes Blur would play as the last of the sun faded into a fuzzy festival evening. It’s a thrill to remember that it’s backed up on the B-side by the Pet Shop Boys’ seriously good remixes of Girls and Boys. Yes please, gay discotheque. Girls! Boys! Girls! Boys!

It’s good to remember that the long, 12-inch mixes of singles served a very definite purpose – and that purpose was dancing. This beautiful, epic, teasing version of the dancefloor classic swells with drama and wraps Jimmy Somerville’s vocals in luscious rose petal synths. It eventually arrives at Duckie-tastic euphoria but it is, of course, the waiting that makes the explosion taste so sweet. Forbidden fruit with all the flavours: from isolation in provincial England to owning the whole damn stage in a fleshy, sweaty, glitter dome where the fruit bowl full of cherries has gone flying. Juice!

The holy chalice of nature and music belongs to Kate. This glorious long version of Running Up That Hill is backed up by Under the Ivy and is there anything else we really need? Take me to the garden, cover me in leaves. Wake me up when I am half tree. 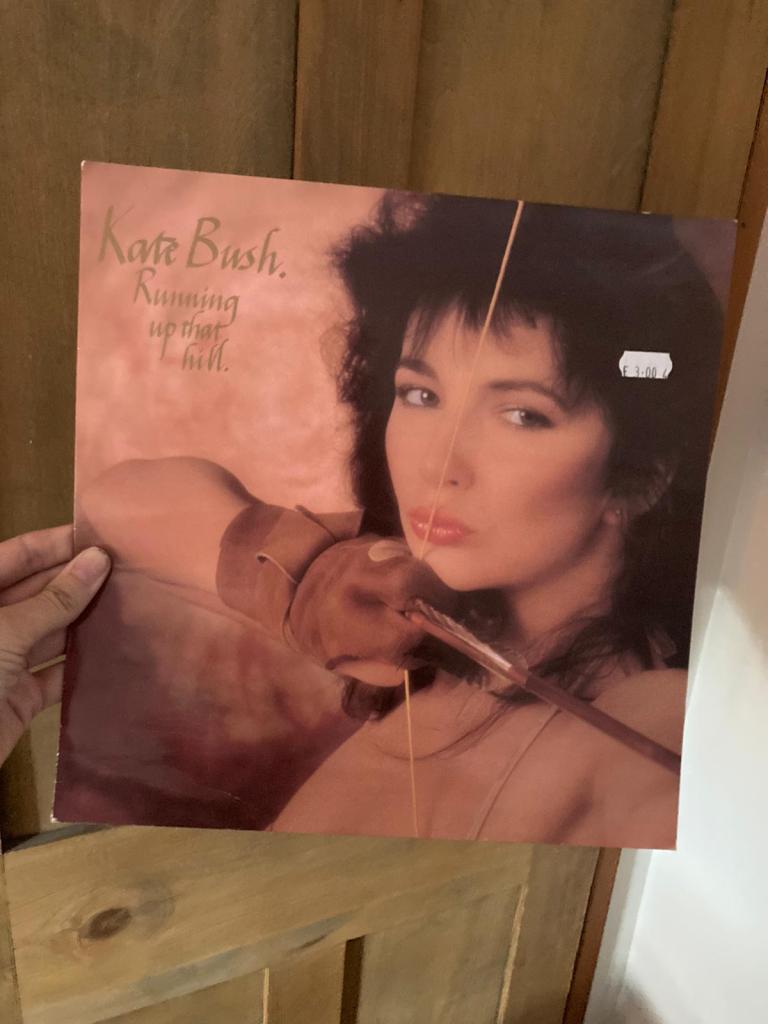 A track that is too much, most of the time. It’s actually frightening, the way it ambushes a perfectly calm mood and sprays you with its reckless fizz of emotion. It’s so short too; there’s no time to get prepared for the deep swoosh of *feeling* it extracts from the very pits of your guts.

If you ever need to get the truth from me forget the thumbscrews, just stick this on. A dangerously brilliant tune. 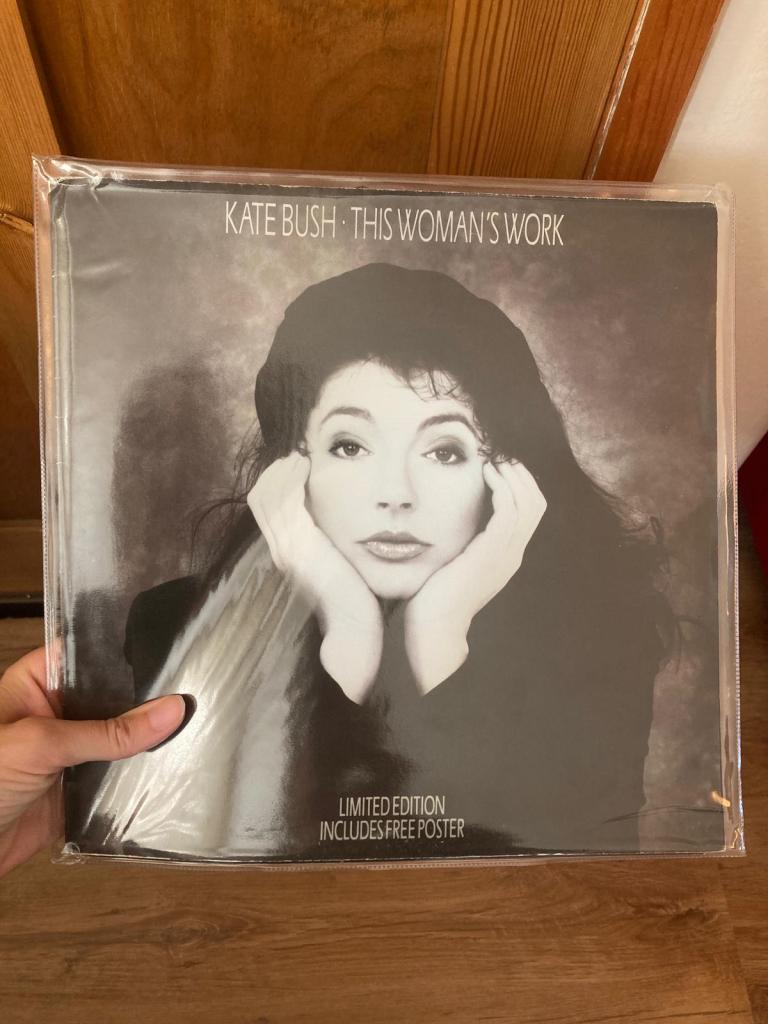 Spiky, funky, the right side of cheesy. It’s a record to be rolled out at the peak of a party, and to be enjoyed through a fog of wine. In fact I was at a party before the pandemic at which Cameo’s other big choon – Candy – was played. Instantly, the room formed a dance troupe of young and old, all doing *that dance*. It’s like candehhh! This took place on the humble but buffed floor of the club house in my local tennis club. I tried to pick up the moves at pace, but I wasn’t good enough. Bloody good it was, this instant Janet Jackson video collective of tight little moves and casual hip swings. I felt oddly excluded in the nicest possible way as I watched on.

The Charlatans always make me think of my little sister Kerstin who, as the youngest of three sisters, and a near infant when this came out (1991), chose The Charlatans as her band as Britpop mania swept our household. This was for two reasons: 1) Blur (mine!) and Pulp (Claire’s, our older sister) were already taken and 2) We banned her from choosing Oasis. Look who’s laughing now! Tim Burgess, a national treasure, and The Charlatans’ back catalogue a much more unspoilt garden of juicy goodness and hidden gems. Over Rising has that plinky-plonky “meet you 5pm at the dodgems” quality that makes it sound so fresh and young from here in the flooded, dystopian, plague-ridden future. Good choice, Kerstin.

Everybody thinks of the Cocteaus as the dreamy soundtrack to a night out in a mossy glade with a frog, a bat and a kindly witch. But while Elizabeth Fraser’s gabbling vocals do seem cushioned by meadowsweet and starlight, there’s also a harshness and a pleading quality, a hint of menace. Sugar Hiccup plunges me back to heartbreak days of 22 to 24. I would listen to these songs via secret headphones while riding a Vespa around North Yorkshire. I felt lost at the time, rumbling across cattlegrids in the twilight.

Falsetto warbles in the marshes and strangeness in the woods, this record also presents the Scrabble champion’s dream combination of vowels and consonants. Beautiful and cryptic, it’s a mini album more than a single and it takes you down mysterious tunnels.

An all-time club classic, and one of the best ever cover versions, it’s impossible not to get emotionally swept away by this song.

Those rippling piano notes that open the song, ahhh, it’s incredibly uplifting, light and optimistic. Rude that this only set me back a pound, really.

Line Up is such a short track, the physical vinyl on side one has a gaping shiny gap where more music could have been. This just about sums up Elastica’s short, sharp, slightly half-arsed genius. The B-side offers a generous three tracks, recorded on John Peel’s radio show: album favourite Vaseline, Rockunroll and a giggly version of Annie. It’s very bassy and thrums like a secret gig at the back of a pub.

“Make a cup of tea, put a record on.” It’s the lyric that tells the story of us all. We’ve got potential, but we’re not quite in the right mood yet to fulfil it, alright? “I’ve got a lot of songs but they’re all in my head.” Yep, Justine, us too. The funny thing is, the famous men around Elastica at that time (Brett Anderson of Suede, Damon Albarn of Blur) were obnoxiously productive in this exact same era (Waking Up was released in 1995). Blur were about to become an arena-filling indie boyband, while Brett was cooking up an album designed to sound like 10 top-10 hits (Coming Up, five singles got into the top 10). Justine, meanwhile, was singing about being under pressure to perform but ultimately too lazy. As post-modern tracks about the quicksilver of stardom go, it’s one of the best. 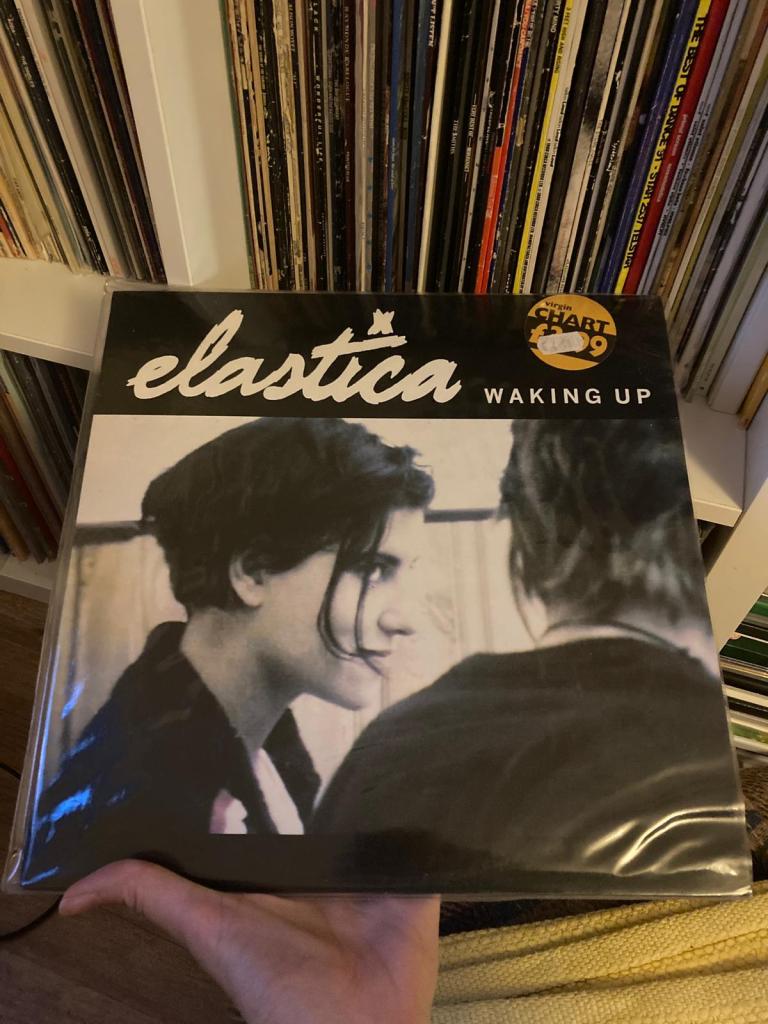 Give me my mirror, love

And oh, oh, how many years

Climbing out your window